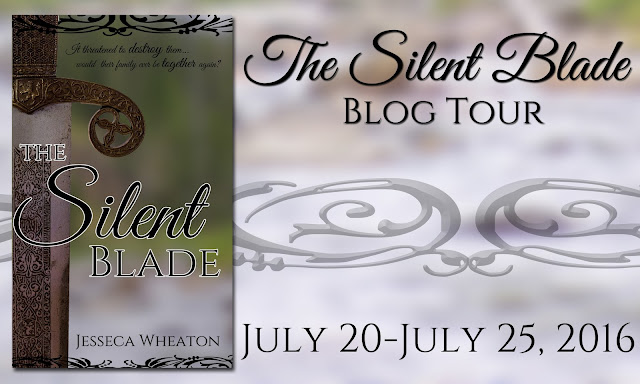 Day one of Jesseca's book blog tour! Which means. . . it's almost time! The Silent Blade releases in two days!! Can't you just feel the excitement?! :D

Now before we go any further, can we please just take a moment and admire this absolutely gorgeous cover? ^_^ 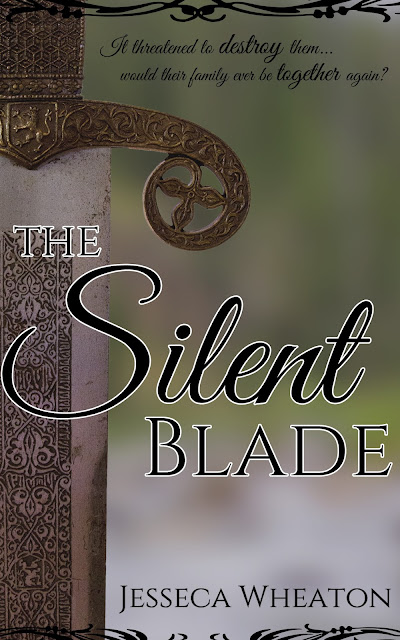 
Eira has no greater desire than to see her life returned to what it once was—before her older brother Kevin's sudden disappearance four years earlier. But the simple life she hoped for seems unattainable; on the contrary, her life is about to get all the more complicated.


When she suddenly finds herself and Willem, her twin brother, taken captive by someone who claims to be Kevin’s enemy, things go from bad to worse. It soon becomes clear that she and Willem are to become bait in a trap set for Kevin, and Eira knows she must try to warn him. But how, when she herself is a captive?


As mysteries of the past are unveiled, and loyalties are revealed, Eira realizes how precious her friends truly are. And when mortal danger threatens those nearest to her, will she be able to trust God with the lives of her friends and family?

Hi Jesseca! To start off this interview, what would you say is your favourite part of The Silent Blade?
My favorite part would have to be when Kevin and Eira just sit and talk about halfway through the book. I know it's not really a major part of the book, but I just so enjoy writing brother/sister parts! And of course, the ending was a lot of fun to write! :)
Oohh... I really enjoyed reading that part! It was sweet seeing the sibling connection the two shared, despite the years apart from each other.  And since we're on the topic of characters, which character do you think you relate to the most?
I'd have to say Kevin! In a lot of ways we're alike. We're both the oldest sibling, we both struggle with letting others down, and being over protective of family. I really enjoyed writing him. :)
Wow, you both do sound very much alike! So, which part of The Silent Blade was the hardest to write and why?
Kevin's story would have had to be the hardest. Mainly because of all the background that went into it, and everything that was going on between him and Merek. Kevin's just a complicated character, too.  Never can quite figure out just what he's thinking.  ;)
Well, let me just say, you did a wonderful job with Kevin! You wove his background into the book beautifully and complicated though he might be, I thoroughly enjoyed it! Now, are there any plans for sequels in the near future?
Not at the moment, but you never know!
Okay! Well, we'll all keep hoping ;) Fun question for you now: What is one fact about you that people either don’t know about or would never guess?
I get very passionate about what I believe when I talk to anyone about politics. I shocked my sisters once or twice because they couldn't believe I was talking so much about one subject. So don't ask me my opinion on anything going on in the world today unless you're willing to listen for a while. ;P

Hehe, that is very interesting! But I understand - when you've got a passion for something, the words just gotta flow out of you ;)

Thanks again, Jesseca, for coming to the blog, and blessings on the rest of your blog tour! Can't wait until the 22nd! :D 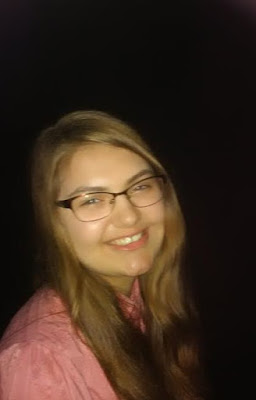 Jesseca is an 18-year old daughter, sister, and a child of God. Her days are spent reading, cooking, spending time with siblings, or playing piano.  And writing, of course! At an early age words fascinated her, and her love for the printed page has only grown. She lives with her parents and seven siblings in the sunny state of Kansas, and she’s convinced there’s no place like home.

a Rafflecopter giveaway
(apologies, the give-away wouldn't load for some reason on here. Just click on the link and it will direct you straight to the giveaway so you can enter! :))

Posted by Blessing Counter at 7:36 am