There are rumours floating around on When Calls the Heart...someone tell me they're not true 😶
Posted by Blessing Counter at 2:16 pm 4 comments:

As I write this, I am seriously wondering whether I will even be able to post this after I finish. My timing is pretty awful honestly. I've been thinking about writing a blog post the past few weeks and the day I finally sit down to write...is in the middle of an ice storm. So yeah. Let's see how long my wifi lasts and if it'll even let me post by the time I finish :P

At this point of time, I think I'm about to blow up at anyone who says to me that homeschoolers literally just stay at home all day and don't have a social life or friends or that they play all day and have extremely flexible schedules and blah blah blah. Literally. I do not. I've started working full time at Tim Hortons, but since I want to try and have the rest of the day to do other things, I work in the morning. At either 5 or 6 in the morning. Which means I'll be waking up 4 or 5 in the morning. So a normal day will be waking up at 4 (or 5) then working until 1pm, then coming home. The only problem with me waking up so early is that I NEED a nap, otherwise I'm an absolute bear the rest of the day. Ask my family. But life still goes on, work or not. Once a week visits with a lady at church, babysitting in the afternoon, youth at night, etc. So YES. In case you're asking. I'm tired. I'm also struggling with finding time with my devotions since my whole morning is gone. So if y'all have any advice I'll glady take it. Also...may I just say...smiling at work has gotten harder. There's so much swearing. I mean, come on people! You DO know that you'd say what you wanted to say faster if it wasn't swearing every other word right? And my biggest fear with hearing all of this for 7-8 hours a day is that the words just swirl around and around in my head and I'm afraid of saying something accidentally. Let's just say I've been trying to guard my words as much as possible lately. And all the gossip...they've had something bad to say about pretty much every single worker at Tim Hortons. Sometimes I wonder if they make things up just so they have something to talk about.

*takes a deep breath* Ok I'll stop ranting now. Sorry xD The blessing...ok so even though it's hard, yes it's a huge blessing that I get to work at Tim Hortons and under the boss I have too. All the workers complain about her or have snide remarks about her but I like her. I think she's pretty amazing and sooo flexible and very fair and friendly and nice and as my first boss, I think I'm pretty blessed.

More blessings from the past few weeks...definitely my family! They've been pretty patient with grumpy old me which I sometimes take for granted but realize it's not just anyone who would still love me even though I'm in tears over the silliest things or mad at something stupid or...I think you get the point.

Oh! I also got accepted into the college I applied to and I'll, Lord willing, be attending there this coming September. I'm also moving onto campus so...yeah. I'm foreseeing a LOT of tears in the near future xD 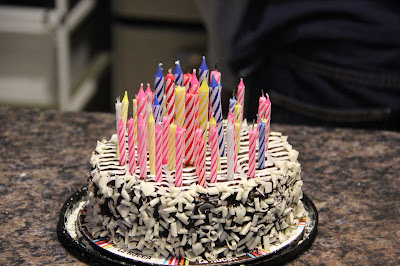 We also celebrated my dad's birthday and managed to find the exact number of candles for his cake. The cake kiiiiinda looked like it was on fire xD But it was a delicious cake. Then...Dad got a birthday surprise none of us was expecting. So you know how baseball players slide to a plate? Well! That's what Toblerone decided to try doing. Except he slid into a chair. And banged his head. And put a massive gash right above his eyebrow. Lots and lots of blood. We ended up having to bring him to the ER and he got three stitches. Boys... 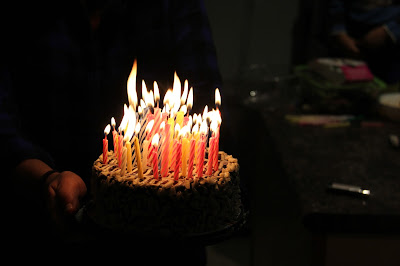 Ooohhhh...and I managed to throw together a dish for my Italian cooking class in less than 40 minutes AND without making a massive mess or using too many dishes. Might not sound like much but it's kind of a bit accomplishment for me cause me and cooking is...yeahhhhh xD 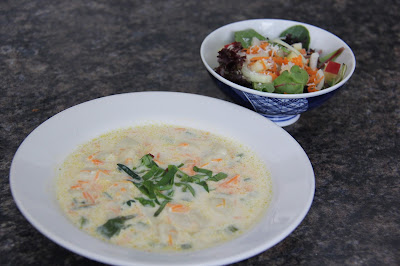 Oh yeah and this ice storm I mentioned earlier? Apparently, it could very possibly rival the ice storm we had in 2013...and that was BAD. So yeahhh hopefully our house doesn't turn into a positive igloo by tomorrow.

Anywayyy...my siblings are wanting to watch a movie with me so I shall see you all later! How's the weather where you all are? Do you have an actual spring or is it still winter for you? (can you imagine teaching younger children seasons? Imagine if they wondered why it was called spring even though it looked like winter outside...) (also I've been so tired lately I thought "prove" was spelled "proove" and the Statue of Liberty was British :P)
Posted by Blessing Counter at 8:08 pm 4 comments: