Hello everyone! Olivia from 9 Kids Plus 2 and I have collaborated together to share with you stories from Adventure Camp! We're going to be taking turns posting on each others blogs, which is going to be super fun! For the first day, we're going to start on mine. Olivia will be in red and I will be in green.  Soo...here we go!

This was a day we had been looking forward to for weeks. Training day! We arrived at the church for the morning service, then afterwards ate at the BBQ and we began training. First off, a name game to help us learn each other’s names and one thing each person liked.

It’s always helpful to be able to call your colleagues by their name! ;)

After that, we did a little talk about different rules and regulations that were required for camp. We also learned a bit about First Aid, and what to do in a situation when the camper hurt himself. Now, came the fun part! Finding out what team you were put on.

Yes, you can’t forget about that part! It was one of the most important parts! ;) I think everyone was looking forward to that just as much as they were camp :)

After the teams were assigned, we had some - team building exercises. Did we do land skis or hoops first, Liv?

We did the hoops first, remember? The head counsellor had to stand beside a wire thing that stuck in the ground. Then, the other two counsellors, from each team, would have to (one at a time of course;) try throwing a hoop and throwing it over the wire thing. I don’t really know what it’s called. :P

Ohhh….right. And the head counsellors had to throw the hoops to their teammates. I almost knocked Lea’s head off ‘cause my hoop throwing is a.w.f.u.l xD

So, the race began! It took a bit of throwing back and forth to finally get it around the wire, but I finally got it around mine, and the next counsellor on my team went. Do you want to say who won?

Okaaayyy….um, I THINK yellow team won first. Not exactly sure since I was concentrating on not getting hit by big hoops that were flying rather dangerously close to my head. Would you agree, Liv?

Thankfully, though, no one was hurt. Actually, I could be wrong about this, but I think red team actually won. That’s how we got in the lead for the next day, right BC?

Oh right! Yeah, you’re probably correct there. Funny thing, actually. I had no idea that those games earned the teams points :P

I don’t think I knew they earned points either. But, getting on with the story…

Hehe yes. Sorry. Okay, after the hoop throwing, we ‘did’ land skis. I got to skip it because I was wearing a dress ^_^

Yeah, BC was pretty happy about that, I can tell you. ;)

Guilty as charged! xD ANYWAY, land skis can be - um - interesting. But as Liv was the one who actually did them, I’ll let her tell you what it’s all about.

Haha, thanks alot! :D I’ll show you all a pic, which sorta explains what they look like, but in it you also have to have team work. Lifting your feet at the same time, saying, “Right foot, left foot.” Is helpful. Another tip is going fast if you can. But again, that requires teamwork. 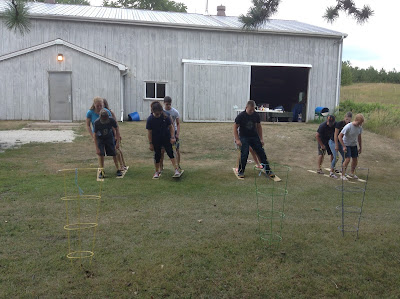 See? Teamwork. :) After this game, which the red team won again, (they were on a roll, you guys) I think that was pretty much it for the training. But, we had to help with moving some stuff and ductaping up the windows with black garbage bags. :)

Green team was actually enlisted to put up tarps for a sort of shelter under the trees. Which was actually quite fun. Mr. S, the camp director, was considering sending L up a tree with rope so that they could tie the tarp up. But yours truly suggested tying something heavy to the rope and throwing it over a branch instead. It was easier, let me tell you! :D

Haha, really? I guess I was doing some other stuff, like removing the Bibles and hymnbooks from the pews, and checking out the girls’ bathrooms with Tiger Lily to make sure there were enough supplies.

After that, I think we were about done for the day. OH, we also had a group photo taken!

That’s right, BC. This was the crew! 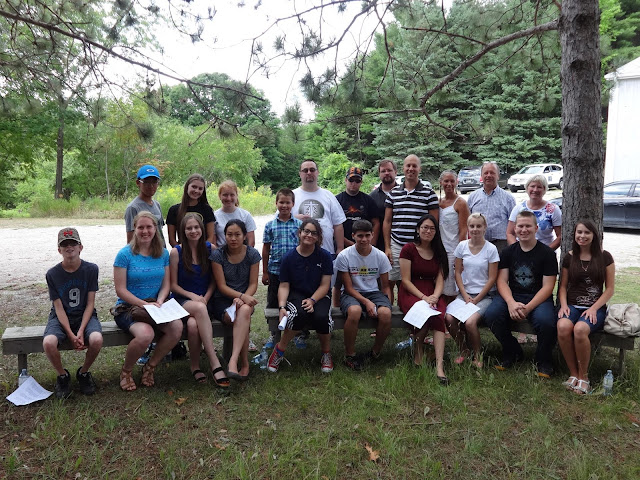 Ha, see the problem with not counting before taking a picture is I don’t know when the button’s being pressed :P I felt much happier and excited than I look in that ^

Hehe, I guess that’s why you should always have a smile on your face! ;) Oh, and she was, believe me, more excited than she looks. I think Tiger Lily was, too, but she looks so mysterious in the photo. :D

XD Yes, Tiger Lily was very excited. I think she had the same problem I did; not knowing when the picture was being taken ;)

I think that was pretty much it for the day. We all had our sheets with our campers names on it, and I know I took mine home to a very excited couple of siblings who came as campers and were excited to find out what team they were on. What about you, BC?

Same here! Snow White especially was excited to see that her friends were coming back to camp! :) After we got back home, there was that very. Long. night before camp started :D

Which brings us to day number 2 (although it was day 1 of the actual camp), but we’ll tell you all about that another time.

Yes, haha. We were planning on doing a super fast overview of Sunday, but apparently when you get two word-lovers together, you end up with a LOT more ;) What’s our count right now? I think we’re on our fourth page or so? xD

That’s true, but oh, well. Sometimes you can’t help it! Yes, we are! XD

Hehe, ok! Well, that about wraps up pre-Day 1. Goodbye until next time! :)