Dare // The Blades of Acktar

Basically, The Blades of Acktar is this super amazing series written by Tricia Mingerink. It follows the story of Leith Torren as he turns from being an assassin of the evil King Respen to being a child of God. The series also focus on Renna and Brandi Faythe, two orphans firmly set in their faith in God. The three go through trial after trial as they try to avoid the clutches of the evil King Respen who is intent on extinguishing every single Christian from the land of Acktar.

Book #1 - Dare - Summary
Third Blade Leith Torren never questions his orders or his loyalty to King Respen until an arrow wound and a prairie blizzard drive him to the doorstep of the girls whose family he once destroyed.

Their forbidden faith and ties to the Resistance could devastate their family a second time.

Survival depends on obedience, but freedom beckons. How far does he dare go to resist the king and his Blades?

No matter what Leith chooses, one thing is certain. 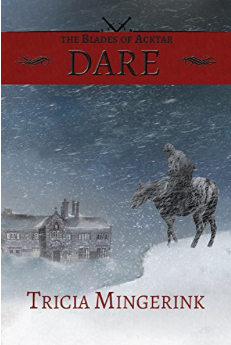 Find on Goodreads or Amazon (*whispers* and don't forget, the entire Kindle series is currently on sale!!)

Oh! And here's a fun post by Tricia Mingerink herself about 7 Things You Might Not Know About the Blades of Acktar
Posted by Blessing Counter at 8:00 am

Email ThisBlogThis!Share to TwitterShare to FacebookShare to Pinterest
Labels: dare, the blades of acktar, tricia mingerink