Hello everybody! Hope everyone had a great week! It's Friday, yippee!

Sooo....today, I'll be doing a review on Mara, Daughter of the Nile by Eloise Jarvis McGraw for Heidi's Cinderella Week. You can check out her bee-yew-ti-ful blog here. 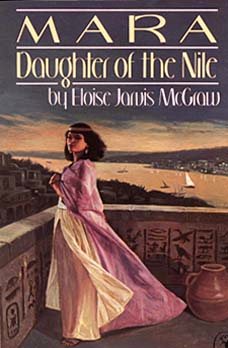 Just to let you know, I have never done a book review/summary before and I'm not too sure of the "rules" if there are any! So hopefully this won't be too horribly done! :) I'll give alerts if there are any spoilers..... ;)

Well, this is exactly the situation that Mara struggles with. It's a battle between loyalty and freedom for this young girl! Witty, beautiful, and proud young Mara has been a slave all of her life. She longs and dreams of freedom everyday. So when the chance of freedom finally brushes by her, she snatches at it. She doesn't care if it's offered by the hard-faced, cruel Lord Nahereh. Of course there's a catch to this. To earn her freedom, Mara must act as interpreter for Innani, the Syrian princess that the Queen of Egypt has chosen for her imprisoned brother, Thutmose. Nahereh commands her to listen and observe any movement at all during Innani's interviews with Thutmose, in other words, Mara will be a spy of the Queen. Despite his warning that it could mean her destruction, Mara instantly agrees, for freedom is worth anything, isn't it?

So she thinks until that fateful day when she meets Sheftu. One of the wittiest men on the face of the earth, and the loyalest friend to Thutmose. Sheftu believes that Thutmose is the rightful heir of Egypt and he is dedicated to restoring the throne to him. Mara gets caught up in Sheftu's plans and before she knows it, she is a spy again, but this time for the king's side. Due to some shrewdness on her part, Sheftu sends Mara as an interpreter for Inanni, not knowing that Nahereh has already hired her as interpreter.

But instead of betraying Sheftu at the first chance she got, Mara decides to "play both ends against the middle- serve both, meanwhile serving only herself. Then, when the cat jumped, she would jump with it!"*quote taken from Mara, Daughter of the Nile* So during her time with Inanni, Mara juggles between Lord Nahereh and Sheftu, managing to satisfy them both with information, yet not enough to discover her secret.

In the next few weeks, while Thutmose and Sheftu are secretly building up an army of followers, Mara finds herself pulling farther and farther away from Naherah, but falling closer and closer to Sheftu! No matter how hard she tries, her feelings for Sheftu grow more and more each day. But before she can tell him so and pledge full allegiance to the king (and Sheftu! :D), her secret is discovered. War breaks out, endangering not only Mara's life, but also the fate of Egypt.

Okay....where do I start?!? Eloise Jarvis McGraw is one of my favourite authors. Her writing is very appealing, it makes you fall right into the flow of the story almost instantly! There is hardly ever a boring place, she keeps you on your toes throughout the entire plot.

*the following paragraph contains A SPOILER*
Knowing that this is a Cinderella week and the prince and princess pretty much ALWAYS end up together, you have guessed that Mara and Sheftu married, right? Well, okay, the author didn't SAY that they actually got married, but it was implied, which is just about as good as saying that they married! :D The relationship between Mara and Sheftu is very . . . interesting! ;) I would not consider it "lovey-dovey" at all! In the beginning, it's mostly a "can I trust you" sort of relationship because Mara is, well, basically, spying on Sheftu, and Sheftu doesn't know if he can trust Mara, who he thinks is just a runaway slave, with his secrets and plots to restore the king to his throne. The two quarrel and bicker almost every time they're together, yet somehow manage to maintain a close friendship with each other. A lot like Beatrice and Benedick from Much Ado About Nothing.
*end of paragraph. Spoiler over ;) *

Hatshepshut is the Egyptian queen who imprisoned her brother, Thutmose III in order that she might reign. She was one of the very few females that actually became a Pharaoh in Egypt. I read about her in history class and I really did like her. I mean, a female as king is pretty amazing! But Ms. McGraw managed to turn my feelings against her with her writing :P In this novel, Hatshepshut is portrayed as the antagonist, the one against Mara and Sheftu and Thutmose. The "bad guy". The author makes her seem sooo evil. I suppose you could consider her as the wicked stepmother, if you wanted ;)

Thutmose, though he could be considered a main character in the book, is not as easy to relate to. To be perfectly honest, I personally think the plot revolves mainly around Mara and Sheftu. The battle for the throne between Thutmose and Hatshepshut is more like the stuff that ties the plot together.  But anyway, back to the character. He is described as restless and longing to be free, and yeah, of course he's wanting to get his throne back. But here's the thing. Though he is the king/prince in this book, he is not THE prince in the "Cinderella sense".  That special title goes to Sheftu. One thing I don't particularly like about Thutmose is the way he acts toward Innani, his Canaanite bride-to-be. True, his sister is making him marry this "barbarian" only to humiliate him, but still, I don't think it would excuse his actions toward Innani. He acts very cool and . . . well, almost rude toward her. He calls her a couple of names, but says it in Egyptian so that, of course, Innani has no idea whatsoever what he's saying. Mara, as interpreter, feels sorry for Innani and translates something completely different to what Thutmose actually says. Which then causes some humour and embarrassment on both Mara and Thutmose's part. But if you want to find out what, you'll have to read the book yourself ;)

Innani is the Syrian/Canaanite princess that Hatshepshut "ordered" for her brother to marry. She is kind, funny, and very shy. She is completely astonished at basically everything in Egypt. Mara at first thinks her very shallow, but as she gets to know Innani better, she finds out that Innani is so much more!

Mara. How on earth does one describe her?!? She's an amazing person. She's extremely smart and very quick in thinking.  She has longed for freedom for so long, and yet when it's finally offered to her, she scorns it. I was close to tears reading that part. Mara is so very brave and loyal, not at all what you would have expected when you first met her at the beginning of the book. Her love for Sheftu is unquestionable. She feels sorry for poor, homesick Innani and tries to be as kind as possible to her,  even though she has to lie quite a few times during translations between Egyptian and Babylonian. I actually find it a little hard to connect her with Cinderella though. Cinderella is gentle, humble, and thinks the best of just about everyone. Mara, on the other hand, can be rough, is very proud, and has a hard time trusting anyone. There are a few times where she's gentle, like when she's with Innani, but she's not able to trust a single soul for quite awhile. Cinderella is the type of person you could make friends with easily. Mara is. . . definitely not so. Anyway, not at the beginning. Who knows? Maybe *SPOILER* after she married Sheftu *End of Spoiler* she became friendlier and it was easier to make friends with her!
Sheftu, Thutmose, Nekonkh (the river captain) and many others call Mara "Blue Eyed One" or "Lotus Eyed One" because of her rare yet beautiful blue eyes. Eloise Jarvis McGraw describes them as lotus blue. I wonder if she means this blue:
this blue:
or this blue?:

I studied the cover of the book I have, but the artist either put too much dark eye makeup so as to cover up the blue and make it invisible or he/she completely forgot to put it on, which is not nice at all because Mara's blue eyes do play a somewhat important part in the book. I think anyway ;) But since we're all Cinderella-y this week, I'll act like Cinderella and think the best of people: The artist just put too much eye makeup ;)

Sheftu is. . . hard to describe. He's one of my favourite characters, but yes, it is too hard to come up with a description that would "live up" to what he is. He's smart, he's proud, he's a lot like Mara, which is probably why they bicker so much. He has an unquestionable loyalty not only to his friend, the king, but also to his native country, Egypt. Because of the dangerous work that he's always associated with, he, like Mara, finds it hard to trust anyone. He's a noble, Lord Sheftu, in Hatshepshut's courts, but the king's group of followers know him as plain Sashai, the scribe's apprentice. That's about all I can say about him. But really, Sheftu is an awesome character!

Of course, there are a lot of other characters that I could talk about, like Nekonkh or Count Senmut, or Chadzar (*shudders* he's a cruel, cruel man, servant to Lord Nahereh), but I'l stop at Sheftu. Because otherwise, this post would go on, and on, and on, and on ;)

Anyway, I hope you enjoyed this review and it makes you want to read this book. Because it's seriously one of the best books ever! :D
Posted by Blessing Counter at 9:18 am